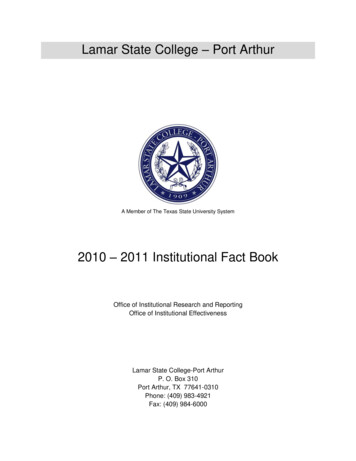 Lamar State College – Port ArthurA Member of The Texas State University SystemMissionLamar State College - Port Arthur, a member of The Texas State UniversitySystem, is an open-access, comprehensive public two-year college offeringquality and affordable instruction leading to associate degrees and a variety ofcertificates. The College embraces the premise that education is an ongoingprocess that enhances career potential, broadens intellectual horizons, andenriches life.Core Values Shared commitment by faculty, staff and administration to a missioncharacterized by student learning, diversity, and community involvementGeneral education/core curriculum that develops the values and conceptsthat allow the student to make a meaningful contribution in the workplaceor communityAcademic and technical programs designed to fulfill our commitment toaccommodate students with diverse goals and backgrounds, using a varietyof delivery methods, on and off campusTechnical education programs that provide for the acquisition of theknowledge, skills and behavior necessary for initial and continuedemploymentStudent achievement characterized by attainment of individual goals andmeasured by successful accomplishments and completion of curriculumCo-curricular opportunities that develop social, financial and civic acuityPrinciplesLamar State College - Port Arthur operates in the belief that all individualsshould be: treated with dignity and respect;afforded equal opportunity to acquire a complete educational experience;given an opportunity to discover and develop their special aptitudes andinsights; and,provided an opportunity to equip themselves for a fulfilling life andresponsible citizenship in a world characterized by change.4

Lamar State College – Port ArthurAccreditationsLamar State College-Port Arthur is accredited by the Southern Association ofColleges and Schools Commission on Colleges to award associate degrees. Contactthe Commission on Colleges at 1866 Southern Lane, Decatur, Georgia 30033-4097or call 404-679-4500 for questions about the accreditation of Lamar State CollegePort Arthur. Normal inquiries about the institution, such as admissionrequirements, financial aid, educational programs, etc., should be addresseddirectly to Lamar State College-Port Arthur and not to the Commission’s office. TheCommission should be contacted only if there is evidence that appears to support aninstitution’s significant non-compliance with a requirement or standard of ThePrinciples of Accreditation: Foundations for Quality Enhancement. Lamar StateCollege-Port Arthur is a member of the Class of 2013 for Reaffirmation ofAccreditation by the Southern Association of Colleges and Schools Commission onColleges.The College is approved by the Texas Education Agency for training veterans underall classifications. The College is also a member of or approved by the American BarAssociation, the Commission on Accreditation of Allied Health Education Programs(CAAHEP), the Texas Department of Aging and Disability Services, the TexasCertification Board of Addiction Professionals, the Texas Department of Licensingand Regulation, the Texas Board of Nursing, the Accreditation Review Council onEducation in Surgical Technology and Surgical Assisting (ARC/SSTSA), the U.S.Department of Education and the Veterans Administration.5

Lamar State College – Port ArthurGeneral InformationLocationLamar State College-Port Arthur, a two-year, state-supported institution, is located inPort Arthur, an industrial and cultural center of Southeast Texas. The College offers freshmanand sophomore-level work in numerous academic and technical/vocational fields. The campussits between the 1000 and 1800 blocks of Procter Street and Lakeshore Drive.Port Arthur has modern public schools, churches, shopping districts and recreationareas serving a community of approximately 70,000 persons. Principal industries in the areaare oil refining, chemical production, shipping and shipbuilding.The metropolitan area, known as the Golden Triangle, includes Port Arthur and the citiesof Beaumont, Bridge City, Groves, Orange, Port Neches, Nederland and Vidor, all of which arelocated within 25 miles of Port Arthur and form the heart of the upper Texas Gulf Coast whereapproximately 350,000 people live.HistoryJohn W. Gates of New York City, one of the founders of Texaco, established Port ArthurBusiness College in 1909, to train people for the petrochemical industry, then in its infancy. TheCollege became Port Arthur Collegiate Institute in 1911, when the school was presented to theBoard of Education of the Methodist Episcopal Church North, a forerunner of the present UnitedMethodist Temple.The church operated the growing campus until 1918, when it was turned over to a nonprofit Texas corporation, which had no capital stock and was overseen by a self-perpetuatingboard of trustees. The name of the school was changed back to Port Arthur Business Collegeand finally, in 1932, to Port Arthur College.6

2. The General Appropriations Act of 1985 directed that a formula be developed by theTexas Higher Education Coordinating Board to provide operational funding to LamarUniversity-Port Arthur on the same basis as other state-supported institutions ofhigher education.Senate Bill 78 in 1989 removed restrictions imposed by earlier legislation on theacquisition of real estate and the construction of facilities on campus.Senate Bill 843 in 1991 clarified the degree-granting authority by allowing LamarUniversity-Port Arthur to issue associate degrees in its own name.On September 1, 1995, the Teas Legislature dissolved the Lamar University System,and Lamar University-Port Arthur and its three sister institutions in Orange and Beaumont joinedthe Texas State University System, which is headquartered in Austin and also includes SamHouston State University, Texas State University-San Marcos and Sul Ross State University.House Bill 1297, signed in June 1999, changed the name of the school to Lamar StateCollege-Port Arthur.8