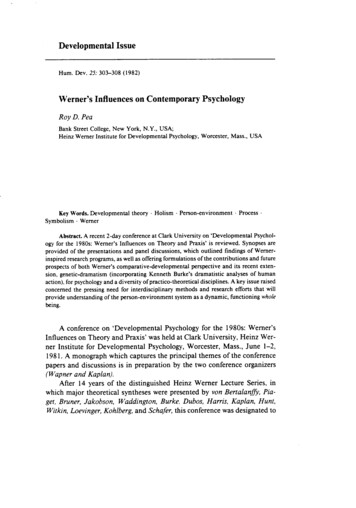 Developmental IssueHum. Dev. 25: 303-308 (1982)Werner's Influences on Contemporary PsychologyRoy D. PeaBank Street College, New York, N.Y., USA,Heinz Werner Institute for Developmental Psychology, Worcester, Mass., USAKey Words. Developmental theory . Holism . Person-environment . ProcessSymbolism . WernerAbstract. A recent 2-day conference at Clark University on 'Developmental Psychology for the 1980s: Werner's Influences on Theory and Praxis' is reviewed. Synopses areprovided of the presentations and panel discussions, which outlined findings of Wernerinspired research programs, as well as offering formulations of the contributions and futureprospects of both Werner's comparative-developmental perspective and its recent extension, genetic-dramatism (incorporating Kenneth Burke's dramatistic analyses of humanaction), for psychology and a diversity of practico-theoretical disciplines. A key issue raisedconcerned the pressing need for interdisciplinary methods and research efforts that willprovide understanding of the person-environment system as a dynamic, functioning wholebeing.A conference on 'Developmental Psychology for the 1980s: Werner'sInfluences on Theory and Praxis' was held at Clark University, Heinz Werner Institute for Developmental Psychology, Worcester, Mass., June 1-2,1981. A monograph which captures the principal themes of the conferencepapers and discussions is in preparation by the two conference organizers(Wapner and Kaplan).After 14 years of the distinguished Heinz Werner Lecture Series, inwhich major theoretical syntheses were presented by von Bertalanffy, Piaget, Bruner, Jakobson, Waddington, Burke, Dubos, Harris, Kaplan, Hunt,Witkin, Loevinger, Kohlberg, and Schafer, this conference was designated to

Pea304explore both the impact and future roles of Werner's emphases on a holistic-developmental approach to human functioning. These concerns wereapproached from content areas as diverse as aesthetics, critical life cycletransitions, environmental design, figurative action, infant cognition, andneuropsychology, by scholars working in the Wernerian tradition, includingmany of Werner's students and colleagues.The first session was entitled 'Theoretical Extensions and Clarifications' and began with a presentation by Sandor Brent. Concerning himselfwith the relationships between the growth of a structure in size, and itsdevelopment (in terms of increasing differentiation and hierarchic integration), he utilized changes in the size of classrooms as an exemplary case ofrelating growth to developmental changes in the forms and functions ofconstituent parts of the classroom structure with respect to the forms andfunctions of the classroom as a whole. Extensions of the model to taskoriented small groups, urban centers, skill learning, and cognitive structureswere suggested.Joseph Glick then discussed differences between Werner, Piaget, andVygotsky, in terms of a distinction between the 'conceptual objects' (theoretical topics) and the 'natural objects' (e.g. children, societies) of their theories. Piaget's conceptual object is said to be the relationships betweenexperience and the characteristic forms of rational thought, Werner's that ofutilizing a vectorial language of dynamic forces to reveal the relationshipsbetween psychological functions and their organismic, holistic basis in process terms. Two Vygotskys were distinguished: the conceptual object of thefirst (Thought and Language) being the dialectical relationship betweensocialized systems of mediation and the individual's private reconstructionof these, whereas that of the second (Mind in Society) is the internalizationby the individual of socially constructed representational systems which areinitially revealed interpersonally. Glick then emphasized the need for adevelopmental psychology that deals with the 'whole child', a task bestsuited to Werner's perspective.Bernard Kaplan argued for a radical reorientation to developmentalpsychology which he designated as genetic-dramatism, and which integratesWerner's organismic-developmental conceptions (especially the emphasison an a priori conception of 'development', not to be conflated with history)and Burke's agenetic analytic categories of agent, act, scene, instrumentality, and purpose. The relationships among these dramatistic categories areviewed as changing with the development of more advanced forms ofhuman functioning, and a major task for developmental psychology set out

Werner's Influences on Contemporary Psychology305as that of revealing and then promoting factors conducive to development,and removing those conditions which are found to inhibit or militateagainst development.The second session of the conference was concerned with 'HumanAction in Varied Large Scale Contexts', and began with a presentation byBernard Kaplan on culture and personality from a genetic-dramatistic perspective. Urging that ethnocentric value distinctions are ingredient to anydescriptive, historical developmentalism that aims to lay out the 'facts' ofontogenesis in a culture, he showed how a cultural relativism which rejects atranscendent definition of development fares no better, for then even eachindividual or subculture defines its own standards.The next presentation, by Seymour Wapner, Robert Ciottone, GailHornstein, Ogretta McNeil, and Angel Pacheco dealt with phenomena of'critical transitions' in the person-environment system throughout life.With the aim of understanding the structural and dynamic system properties through developmental comparisons (in the Wernerian sense of theterm), they analyzed developmental changes before and after transitionssuch as that from home to nursery, entering college, migration to the UnitedStates from Puerto Rico, and retirement.A third session, entitled 'Part Processes in a Holistic Context', had twoparts, the first on 'Concept Formation and Symbolization', the second on'Perception'. In the first part, Margery Franklin discussed how language isused in constructing imaginary situations in play, and provided an illuminating discussion of the requisite types of activities for a play episode tooccur (and what is currently known about their ontogenesis, from her ownand others' research): ( I ) the establishment, specification, and maintenanceof the sphere of play; (2) the establishment of identities for play entities objects, persons, places; and (3) the creation and organization of events andsequences of play episodes.Roger Bibace and Mary Walsh then discussed their research on thedevelopment of conceptions of illness and the different types of explanations individuals give for colds and heart attacks as a function of their age.Their goal was to highlight the different aims of their roles as researchers(exemplified in that enterprise) and their roles as clinicians and teachers offamily medicine practitioners and to suggest ways of reconciling them.Jonas Langer presented research findings on the relations betweenlogic and symbolization from the ages of 6 to 18 months, regarding theprocess and structural organization of the development of representationalcognition. His data indicate that the emergence of elementary logico-math-

Pea306ematical operations and physical functions is not dependent upon the prioremergence of symbolic activity, as others have suggested.Leonard Cirillo and Bernard Kaplan then outlined and illustrated theirapproach to the symbolic device of figurative action with a diversity ofmaterials aimed at illustrating the revolutionary powers of symbolic actions(which express multivocality of meaning) to provide perspective by incongruity. Unlike much current work on metaphor which is directed only to theanalysis of individual words in alien sententiavsituational contexts, theydiscuss nonverbal as well as verbal figurative actions in scenes as diverse astherapy, ritual, hypnosis, politics, and the definition of psychology itself.Further, they argue for the radical position that no characterizations of asituation are 'literal'.In the part of that session on 'Perception', Robert Pollack presenteddata indicating the utility of maintaining Werner's distinction between process and achievement for age-difference studies in adulthood. Apparentregression in problem solving performances by the aged in embedded figures tasks was not due to regressions in conceptual abilities, but to low-levelproblems in visual system operations. Ricardo Morant then outlined theanticipation in Werner's work of many contemporary studies in perception,and presented results from his experiments dealing with the interaction ofapparent body posture and perceptual aftereffects from prism adaptationand labyrinthian stimulation. Sybil Barten presented theory and researchdirected to the problem of aesthetic experience, of how objects may beviewed as having their own physiognomy, or expressiveness. She discussedWerner's early work on the psychology of aesthetic enjoyment, and theroots of lyric poetry in magic, song, and dance, and its influence on hercurrent research on modes of object description by artists versus scientistsunder varying experiential conditions.George Rand began the fourth session on 'The Demands of Praxis onTheory' by describing his applications of comparative-developmental theory to designing and evaluating policies in practical affairs, for such settingsas architecture and urban planning. Of particular interest were his processanalyses of the dialectic between the romantic and the rational in projectplanning and design. Edith Kaplan discussed her own and others' neuropsychological studies indicating that research attentive to Werner's observations on process versus achievement is more accurate at distinguishing apatient's abilities and deficits than are predominant statistical methods.After each session, discussants were prepared to interrogate individualspeakers and raise general questions for session members. The discussants

Werner's Influences on Contemporary Psychology307were Marc Bornstein, William Damon, Rachel Falmagne, Howard Gardner,Roy Pea, Ina Uzgiris, Sheldon White, and Peter [email protected] Space precludes anaccounting of the resulting dialogue, but the major themes which predominated in the discussions will be briefly summarized.The relation between Werner's work and today's psychology was particulary controversial. Although many of Werner's contributions have beenovertly acknowledged, debate centered on whether Werner's research andideology has a guiding role to play in future developmental and psychological research, or whether it is important primarily for historical reasons.Central to this debate was a point elaborated by Kaplan: that from Werner'sperspective, all psychology is developmental psychology; it is a way of conceptualizing the field of study, and developmental considerations must beat the core of any domain of psychological inquiry. It was observed byconference participants that Werner's stress on process is apparent in cognitive science, developmental, and neuropsychological research. Other waysin which Werner's unique developmental perspective prefigured many ofthe dominant themes of psychology today are: (1) his holistic orientation,which maintained that the meaning of an activity is context-dependent,and that an understanding of behavior and development requires such anorientation (only in the last decade or two has context played a centralrole in psychological studies); (2) the centrality of symbolic processes,whether manifested in art, language, magic, or ritual, for an understandingof human functioning; (3) the emphasis on the coherency of children'sthinlung in terms of its structured totality (rather than its 'illogicality');(4) the stress, more common in the cross-cultural cognitive and 'ecologically valid' psychological studies today, that the tasks which are used toassess mental functioning must have significance in the system of activities in which an individual typically participates, and (5) the suggestionthat a central aspect of mental development involves 'ordering functions'which give form and direction to the lower activities - today's 'metacognition'.Those who contended that the Wernerian perspective still holds greatpromise underscored several of its programmatic features, yet to be fulfilled: (1) the need to articulate the range and interrelationship of methodsfor a developmental psychology which is capable of providing an understanding of the person-environment system as a dynamic, functioningwhole, not as a collection of labelled and isolated parts; (2) systematic programs of research, utilizing such methods, which reveal the workings of theprocesses of developmental change for a diversity of content domains,

Pea308which would support (3) intervention programs aimed to maximize developmental progress to specified developmental goals.Another point of contention concerned the relation between the goalsof the natural sciences and the human sciences. Those with Wernenantraining tended to stress a fundamental distinction between the two, withthe goal of human science research being one of 'understanding' (e.g. N.R.Hanson, S. Toulmin) rather than prediction and control, which are postulated as the goals of hypothetico-deductive models of the social sciences.The status of 'explanation' in the two orientations is a critical issue thatremains to be addressed by advocates of the distinction. Further, the manner in which principled decisions can be made from such a holistic developmental perspective as to what specifically one will study, and whataspects of functioning will not be considered in a particular case, remains tobe specified. Certainly for clinical practice, boundaries would need to bedrawn. So the critical question remains: where between group means andindividual life biographies is the research province of neo-Wernerian perspectives?Roy D. Pea, Bank Street College of Education, Center for Children andTechnology, 610 West 112th Street, New York, NY 10025 (USA)

An Analysis of the Mental Health Work Force in North Carolina