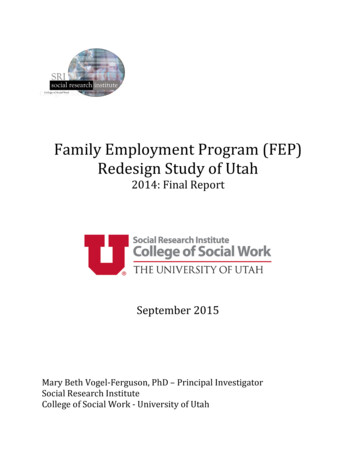 Family Employment Program (FEP) Redesign Study of Utah2015: Wave 3EXECUTIVE SUMMARYIn fall 2011, the Social Research Institute (SRI) of the University of Utah’s College of Social Workpartnered with Utah’s Department of Workforce Services (DWS) to conduct a longitudinal study ofnew FEP participants beginning their experience with cash assistance, following a significantredesign of the FEP program. The purpose of the study was to 1) provide information regardingbasic demographics, attitudes, employment supports and barriers, and experiences with DWS, 2)monitor outcomes for this group over time, and 3) investigate differences between this cohort andthe original FEP Study cohort which had engaged in an identical study from 2006 – 2008. Thisresearch provided an important method for evaluating the impact of the FEP Redesign.In Wave 1 of the FEP Redesign Study, 1075 cash assistance recipients new to FEP were interviewedbetween August 2011 and May 2012. Data regarding basic demographics, family background andcurrent family composition, respondent characteristics and attitudes toward employment andparenting, access to and use of employment supports, experiences with DWS personnel andservices, employment history and current work experience were collected.This cohort was very similar to the Wave 1 cohort from the original FEP Study in many ways.Significant differences were typically related to the impact of the great recession such as a higherpercentage of males, longer stretches of unemployment prior to entering FEP, higher rates ofhaving accessed unemployment insurance and lower rates of participants with a welfare history.The complete findings from Wave 1 of the FEP Redesign Study can be found at:http://www.socwk.utah.edu/sri/pdf/DWS 2012 FEPRedesignReport.pdfThe 1075 original participants were contacted one year following their Wave 1 interview. Of thisoriginal group 862 chose to participate in Wave 2, an 80% response rate. Of the 862 respondents,68% received 6 months or less of cash assistance in the year following their Wave 1 interview. TheWave 3 data reflects interviews with 762 of the 862 Wave 2 respondents, an 88.1% response rate.Of Wave 3 respondents who had lived in Utah all 12 months, nearly three-quarters (74.2%)received no months of cash assistance between Waves 2 and 3 of the study and another 15.5% hadreceived 6 months or less during that same time. This dramatic drop in the use of cash assistancebenefits extended, to a lesser degree, to other DWS services as over one-third (34.6%) of thesample no longer had any contact with DWS for either public benefits or work related supports.Most Wave 3 respondents (74.4%) had been employed at some time during the past year and49.8% were employed at the time of the interview. While significantly higher than employmentrates at Wave 1, these figures are lower than found in Wave 3 of the original FEP Study. Differenceswere most pronounced in the group experiencing long term (more than one year) unemployment.The great recession continues to impact some sectors of the labor market and thus some studyparticipants. Given the significantly high rates of physical and mental health issues in this group,not having health insurance can be a barrier to long term job retention; yet this was less of an issuefor FEP Refocus participants as only 28% lacked health insurance at Wave 3. This was significantlybetter than the 40% that was found in the same situation at Wave 3 of the original FEP Study.Education continues to be a priority for many FEP Redesign Study respondents. In the past year24.2% of Wave 3 respondents had been involved in education and training programs and nearlyhalf this group was still in school. Whether or not these programs were supported by DWS, mostrespondents knew instinctively that education was their pathway not just out of welfare but theway to a better life for them and their children. These attitudes were also reinforced by therecession and the need to improve education credentials to be more competitive on the job market.i

While a high percentage of the Wave 3 respondents were employed, in school, and otherwiseactively working to improve their lives and the lives of their children, many still struggled to makeends meet every month. Low wages, irregular shifts and few safety nets in times of crisis wereregular concerns. To make ends meet, Wave 3 respondents were still cutting back on necessities(61%), delaying bill payments (61%), receiving money from family or friends (54.1%) and pawningbelongings (36%). Wages among Wave 3 respondents are generally not at a level which wouldmove their families out of poverty. Yet, small increases in income triggered loss of access to meanstested programs such as SNAP, and increased child care costs. Typically it was educationalopportunities that were put aside to provide the basics today.Wave 3 data also provided a first look into the prevalence of Adverse Childhood Experiences (ACEs)and the relationship of these experiences to many aspects of participant personal wellbeing andparticipation in activities of adult life, including employment. Overall, it is evident that the Utah FEPpopulation has a much higher prevalence of ACEs than the Utah general population. In turn, theassociated negative health, mental health and social outcomes are occurring at a higher rate withinthe FEP population. Significant differences in the prevalence of ACEs and the aforementionedwithin group comparisons depict this trend.These associated negative health, mental health and social outcomes are also related to selfreported employment barriers in the FEP population. In each wave of the study, interviewrespondents were asked about individual issues and the contribution each made to difficulties insecuring or retaining employment or attending school/training. In the end, each respondent wasasked to reflect on the greatest employment barrier over the past year. As analyzed with the Wave1 data, adults with 4 ACEs had a significantly higher prevalence in reporting their greatestemployment barrier was: lack of education, physical health issues, mental health issues, or having acriminal record. As such, a relationship between adverse childhood experiences and occupationalhealth exists in the FEP population.As the culmination of the FEP Redesign, the data from this longitudinal study sheds light on thestrengths and areas which still need to be addressed. Areas of clear success include the WorkSuccess program and the improvements to Transitional Cash Assistance (TCA). Both programstarget those who are work ready or nearly work ready. Both programs were rated very highly byparticipants and increased their immediate or eventual attachment to employment. Areas whichcontinue to need attention include Activity Review and Career Pathways/Retention. Worker inputsuggests some have shifted the use of Activity Review from a pathway for reengagement to a tool tohelp manage desired outcome measures. The focus on career pathways and retention has neverbeen fully developed although program participants often seek a partner in trying to create abroader plan not just for today, but to sustain the family in the future.Findings from Wave 3 of the FEP Redesign study are very consistent with the findings of Wave 3ofthe original FEP Study and present a FEP population which is very diverse. Most seek assistance fora very short period after an initial incident led to the need to seek help. Once the initial problemwas resolved a return to self-sufficiency soon followed. Only a small percent require very intensiveinterventions and extended engagement. This information has significant policy and programmaticimplications as DWS continues to seek ways to best serve its customers and the people of Utah. TheFEP Refocus efforts continue these efforts by using a “family focused and work focused” lensthrough which to view customer engagement. This two generation approach is the next step in theongoing effort to serve some of the most vulnerable members of our community, striving toimprove outcomes for the families and especially the children experiencing poverty in Utah.ii

KEY FINDINGS1. Cash assistance use between Wave 2 and Wave 3 dropped significantly. Of respondents who hadlived in Utah the entire year (N 717), nearly three-quarters of the sample (74.2%) used nomonths of cash assistance. This finding was nearly identical to the original FEP Study. Only 74(10.3%) individuals used more than 6 months of cash assistance during this same period. The dropin usage of DWS services extended to all other DWS programs and services as 34.6% of respondentswere receiving no DWS benefits (FEP, SNAP, childcare or unemployment benefits) at Wave 3.2. Lack of heath care coverage was a significant issue for study respondents. Nearly half (48.8%)had gone without coverage at some point in the past year and 27.7% had no coverage at the Wave 3interview. Of the 1,208 children evaluated in Wave 3, 60 (5.0%) had no health insurance.Comparing these findings with the FEP Study shows improvement in the portion of individuals withhealth insurance, a result likely linked to the implementation of the Affordable Care Act. However,as in the original FEP Study, in Wave 3nearly one third (30.3%) of those with fair to poor mentalhealth and 28.0% of those with fair to poor physical health had no health insurance.3. The impact of the Deficit Reduction Act (DRA) on the scope of services offered to DWS customersand the appropriateness of employment plan activities has been significant. The pressure ofneeding to meet the 50% participation rate is wide reaching, even impacting the customer/workerrelationship. A select group of customers are well served by engaging in the activities which“count.” Many more are finding the activities are a barrier to moving toward self-sufficiency andreaching their goal of leaving cash assistance permanently.4. Findings at Wave 3 of both the original FEP Study and Wave 3 of the FEP Redesign study werevery similar in many important areas including employment rates, reductions in use of DWSbenefits, and the prevalence of specific employment barriers. In both studies close to one quarter ofthe respondents indicated no barriers to employment with most improvement coming betweenWave 2 and Wave 3.5. The inclusion of Adverse Childhood Experiences (ACE) questions in Wave 3 provided data, whencompared to State ACE data, indicating the experiences of FEP participants are significantlydifferent than the general population. The data identifies multiple links between childhood traumaand adult challenges in factors related to employment and other areas of adult functioning.6. The impact of the recent recession was recognized as having a significant impact on employmentrates at Wave 1 and that impact continued into Wave 3. The most significant impact has been on thelong-term unemployed. This group continues to struggle reattaching to the workforce following anextended absence.7. Those who were working with DWS at Wave 3 were typically customers who continued tostruggle with multiple employment barriers. These respondents were less likely to feel like theirviews were considered when making the employment plan, that the plan activities wereinappropriate, and to be satisfied with activities such as Work Success (WS) (although overallsatisfaction with WS remained very high).8. A majority of respondents, 91.2%, agreed or strongly agreed, with the statement, “It is good torequire screening for possible drug use for people applying for cash assistance.” Of those whodisagreed, many felt it was a violation of rights, was discriminating or was invasive. Some also feltthat the process might get in the way of people accessing the assistance they needed. Another smallportion felt that due to medical conditions, or use of specific prescribed medication, drugscreenings were not an accurate measure of illicit drug use.iii