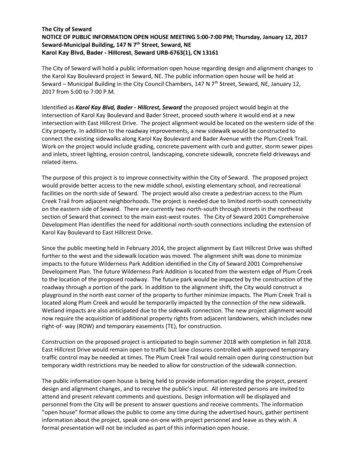 The City of SewardNOTICE OF PUBLIC INFORMATION OPEN HOUSE MEETING 5:00-7:00 PM; Thursday, January 12, 2017Seward-Municipal Building, 147 N 7th Street, Seward, NEKarol Kay Blvd, Bader - Hillcrest, Seward URB-6763(1), CN 13161The City of Seward will hold a public information open house regarding design and alignment changes tothe Karol Kay Boulevard project in Seward, NE. The public information open house will be held atSeward – Municipal Building in the City Council Chambers, 147 N 7th Street, Seward, NE, January 12,2017 from 5:00 to 7:00 P.M.Identified as Karol Kay Blvd, Bader - Hillcrest, Seward the proposed project would begin at theintersection of Karol Kay Boulevard and Bader Street, proceed south where it would end at a newintersection with East Hillcrest Drive. The project alignment would be located on the western side of theCity property. In addition to the roadway improvements, a new sidewalk would be constructed toconnect the existing sidewalks along Karol Kay Boulevard and Bader Avenue with the Plum Creek Trail.Work on the project would include grading, concrete pavement with curb and gutter, storm sewer pipesand inlets, street lighting, erosion control, landscaping, concrete sidewalk, concrete field driveways andrelated items.The purpose of this project is to improve connectivity within the City of Seward. The proposed projectwould provide better access to the new middle school, existing elementary school, and recreationalfacilities on the north side of Seward. The project would also create a pedestrian access to the PlumCreek Trail from adjacent neighborhoods. The project is needed due to limited north-south connectivityon the eastern side of Seward. There are currently two north-south through streets in the northeastsection of Seward that connect to the main east-west routes. The City of Seward 2001 ComprehensiveDevelopment Plan identifies the need for additional north-south connections including the extension ofKarol Kay Boulevard to East Hillcrest Drive.Since the public meeting held in February 2014, the project alignment by East Hillcrest Drive was shiftedfurther to the west and the sidewalk location was moved. The alignment shift was done to minimizeimpacts to the future Wilderness Park Addition identified in the City of Seward 2001 ComprehensiveDevelopment Plan. The future Wilderness Park Addition is located from the western edge of Plum Creekto the location of the proposed roadway. The future park would be impacted by the construction of theroadway through a portion of the park. In addition to the alignment shift, the City would construct aplayground in the north east corner of the property to further minimize impacts. The Plum Creek Trail islocated along Plum Creek and would be temporarily impacted by the connection of the new sidewalk.Wetland impacts are also anticipated due to the sidewalk connection. The new project alignment wouldnow require the acquisition of additional property rights from adjacent landowners, which includes newright-of- way (ROW) and temporary easements (TE), for construction.Construction on the proposed project is anticipated to begin summer 2018 with completion in fall 2018.East Hillcrest Drive would remain open to traffic but lane closures controlled with approved temporarytraffic control may be needed at times. The Plum Creek Trail would remain open during construction buttemporary width restrictions may be needed to allow for construction of the sidewalk connection.The public information open house is being held to provide information regarding the project, presentdesign and alignment changes, and to receive the public’s input. All interested persons are invited toattend and present relevant comments and questions. Design information will be displayed andpersonnel from the City will be present to answer questions and receive comments. The information"open house" format allows the public to come any time during the advertised hours, gather pertinentinformation about the project, speak one-on-one with project personnel and leave as they wish. Aformal presentation will not be included as part of this information open house.

The City will make every reasonable accommodation to provide an accessible facility for all persons.Appropriate provisions for the hearing and visually challenged or persons with Limited EnglishProficiency (LEP) will be made if the City is notified by January 4, 2017. Notification should be submittedto: Bruce Smith, City Administrator, City of Seward, 537 Main Street (PO Box 38), Seward, NE 684340038; [email protected]; voice telephone (402) 643-2928, Fax (402) 643-6491. Thepublic is being encouraged to make suggestions or express concerns regarding this proposed project.Comments will be collected through January 27, 2017. Comments should be submitted to: Julie Ogden,Project Manager, JEO Consulting Group, PO Box 207, Wahoo NE. Information on this project will bemade available at city hall and also on the City of Seward website http://www.cityofsewardne.com.

Public Information MeetingKarol Kay Blvd, Bader - Hillcrest, SewardURB-6763(1), CN 13161Thursday, January 12, 2017Project Location5:00 to 7:00 P.M.Seward MunicipalBuilding - City CouncilChambers147 N 7th StreetSeward, NEPRO J EC T CO N TA CTSCity of SewardJohn HughesPublic Facilities Director402.643.4000 ext [email protected] AldrichStreet Superintendent402.643.4000 ext [email protected] Consulting GroupJulie Ogden, PE142 W 11th StreetP.O. Box 207Wahoo, NE [email protected] Boone2700 Fletcher AveLincoln, NE [email protected] FORMS:Please send CommentForms to Julie OgdenLOCATION:The proposed project would extend Karol Kay Boulevard, located on the east side of Seward, fromBader Avenue to East Hillcrest Drive in the City of Seward (Seward County) Nebraska.PURPOSE & NEED:The purpose of this project is to improve access across Seward. The proposed project wouldprovide better access to the new middle school, existing elementary school, and recreationalfacilities on the north side of Seward. The project would also create a pedestrian access to thePlum Creek Trail from the adjacent neighborhood.The project is needed due to limited north-south connectivity on the eastern side of Seward. Thereare currently two north-south through streets in the northeast section of Seward that connect to themain east-west routes. The first is Nebraska Highway 15 (N-15), located in the center of Seward.The Second is Columbia Avenue which is about 2,000 feet east of N-15. The elementary school islocated on Columbia Avenue, which can get very busy before and after school. In 2013, the newSeward Middle School opened at Waverly Road and Karol Kay Boulevard. Karol Kay Boulevarddoes not currently connect with East Hillcrest, one of the main east-west routes. The city’s 2001comprehensive plan includes extending Karol Kay Boulevard to East Hillcrest Drive.or drop them off at CityHall.SCOPE OF WORK:The project would extend the existing Karol Kay Boulevard, from its current end at Bader Avenue,to East Hillcrest Drive. The new roadway segment would be constructed on a new alignment andwould be approximately 0.28 of a mile long. The improvements would include concrete pavementwith integral curb and gutter sections. The concrete pavement is proposed to be 27-feet wide witha concrete sidewalk on the east side. The sidewalk would be connected to the existing Plum CreekTrail. Storm sewer and curb inlets would be included in the project to address drainage. Streetlighting would be installed according to City of Seward standards. Additional project improvementsinclude landscaping, seeding, erosion control and fill for roadway construction.

Project DetailsALIGNMENT CHANGES SINCE LASTPUBLIC MEETING: See attached aerial mapfor current road locationSince the last public meeting in February of2014, a determination of the property ownedby the City as a future public park (based onthe 2001 comprehensive plan) was made.This determination required the project tominimize the impacts to the future WildernessPark. To achieve this, the roadway alignmentmust follow the western boundary of theproperty as much as possible. This is furtherwest than any previous discussions with thepublic. The changes include shifting theintersection of Karol Kay Boulevard with EastHillcrest to be located 700 feet east ofEastridge Drive, a previous alignment had theintersection at 775 feet east of Eastridge Drive.The City, in order to mitigate impacts to thefuture park, would develop a playground onthe northwest corner of this property (adjacentto Karol Kay Boulevard). In addition,landscaping would be installed along thewestern edge of the road right of way.CONSTRUCTION SCHEDULE:The project construction is tentativelyscheduled to begin as early as summer of2018, and estimated to be completed in latefall of the same year.RIGHT-OF-WAY:This project would require acquisition of newproperty rights for construction, including newright-of-way and temporary easements forconstruction. The majority of the work wouldbe completed on property currently owned bythe City of Seward. Access to the adjacentproperties would be maintained during theproject but may be limited at times due tophasing requirements.ESTIMATED COST:The estimated total project cost for isapproximately 950,000 and would derive fromfederal and city funding sources.TRAFFIC VOLUMES:Karol Kay BlvdNorth of Bader AveYear20162036ADT325425% Trucks 5% 5%ADT Average Daily Traffic on Road% Trucks estimated % of semi’s or otherheavy vehicles on roadACCOMMODATION OF TRAFFIC:The proposed project would be constructed ona new alignment; detours for traffic would notbe required. A lane restriction would be usedon East Hillcrest to facilitate construction, asneeded, using appropriate traffic control. PlumCreek Trail would remain open for use duringthe project however there may be a timewhere its width is restricted. Appropriate trafficcontrol would be used to define this restriction.POTENTIAL IMPACTS:Wetland impacts are anticipated due to thesidewalk connection to Plum Creek Trail.Mitigation would not be required. Impacts tothe future Wilderness Park are anticipateddue the roadway alignment. Impacts wouldbe mitigated through the addition ofplayground equipment and landscaping.Temporary impacts to the Plum Creek trailare also anticipated due to the sidewalkconnection.SidewalkExisting DrainageProposed DrainageWetlandsLimits of ConstructionTrail Restriction

Municipal Code of the City of Seward - Seward, Nebraska

Seward County Board of Commissioners May 29, 2018